A couple of weeks ago, I posted my annotated bibliography about “Body Image and the Media”, I have taken this as my research task for BCM210 course. My original idea was to explore how people are influenced by the media in general about body image. However now it’s a bit changed.

For me Body Image immediately came in my mind to research because I am one of those who are highly influenced about of what the deal is about on beauty, media is one of the main factors which is influencing body image in young people. Body image is a multidimensional, subjective and dynamic concept that encompasses a person’s perceptions, thoughts, and feelings about his or her body (Neagu,2015). Moreover a lot of research suggests that a negative body image is increasing rather than dropping.
Which leads me to my updated research question: “How does social media influence body image in young people”

I decided to stick with social media to keep my research concise, rather than all types of media (e.g. TV, Radio). Also I feel like body image has started emerging recently as social media is quite new to us. If everything goes alright, I do feel that my research could be useful for someone who is negatively influenced on body image.

In order to collect both qualitative and quantitative data, our group decided to conduct survey and focus group. We got a total of 26 responses, 35% male and 65% female. The focus group interview was held on 14th March, with a group of 3 people. Below are the survey results, my main target from survey was to find out if the respondents use social media on regular bases or not, and to find out who they tend to follow, do the people they follow matter to them in terms of decision making? For the Focus group, I mainly focused on what makes them change themselves and what are the things they compare themselves to.

Our survey “Influences of Key Opinion Leaders” was designed according to behavioural, attitude and general questions. We wanted to find out who are the people which are most influential in their life. We started off with asking about their frequency of doing the events.

Followed with the next question about what they tend to look at while they are on social media platform. 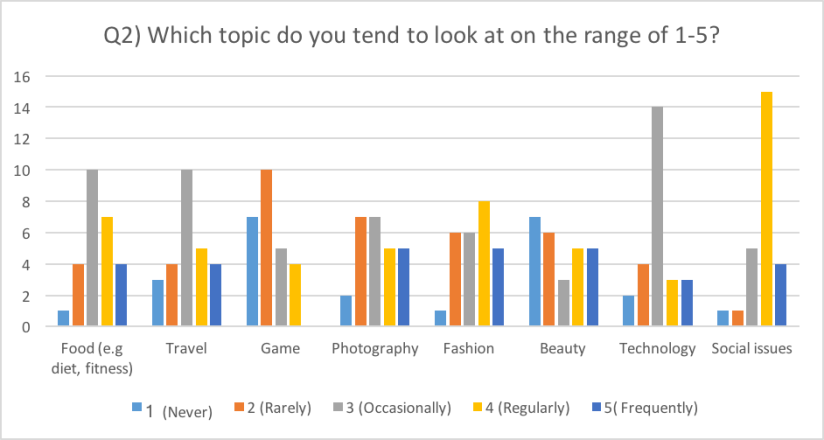 Move on to the next question, these questions were added to see if the respondents are obsessed with the celebrities or not.

This brings me up to the next question, this question was important to add in because I wanted to see if the surrounding people affects them more or the celebrities have influence on them.

According to Figure 4, 38% of them choose friends and 27% of them choose family as the most influential people in their life. Personal idols and celebrities did influence a little bit on their purchases but family and peers have more to say.

Another question data which mattered was about “Did you buy any products because of KOLs introduction”.

35% said yes and 65% of them said no, those who said no says they do not follow Key Opinion Leaders, they make choices independent of others opinions, they said its very often very expensive. Those who did purchase the product said they are usually satisfied, feel stronger sense of identity in respective subculture, feels somewhat accomplished. 63.6% of them purchased “beauty” products.

In the focus group, I asked the participants 4 questions, which were the extension to the survey questions, focus group allowed me to directly ask questions related to my specific topic “Body image”. I wanted to know who they compare themselves to and have they ever changed themselves after seeing something or someone on social media, and lastly who’s opinion matter to them the most.

Students A said she certainly did change herself because of something or someone she saw on social media but in a positive way. For example when she sees fitness post, she will feel motivated and will plan on doing her work out again.

Student A, B and C agreed to one point that no matter how much they resist to not get influenced by people on social media, they still do compare themselves to others. Like student C says when she scrolls through her page she sees her age group of people getting engaged, married and having kids, so she feels pressurized and askes herself if she at the right pace or not, is she good enough or not.

Lastly with the follow up question, I found out that all 3 of them said they definitely feel close friends, mutual friends and family are the one who are actually more influential. Student B says that yes celebrities are icon and everyone focus on them at the end of the day but I mainly get pressurized from family members who have the pressure on me comparing with other person to be the same. ‘Young girls are put into pressure by intrusive and controlling parents to gain perfection in everything they do in lives’ (Irving, 2008).

To conclude, the results from the survey and focus group have similarities, the data support each other. According to Clask & Tiggerman research, they found they girls had the desire to be thin not because of social media but from their peers who always talk about body sizes. In my study I found that Key Opinion Leaders do influence people on some extent, but interpersonal factors like peers and family are the most influential on what they do on daily basis, it could be about beauty, body size, studies, marriage, relationship. My respondents said they do have ups and downs like any other celebrities it’s just that celebrities are better at hiding it, therefore they have to accept who they are because perfection can’t be achieved.

A. Irving, J. (2008). An exploration of the influence of media, advertising, and popular culture on the self-esteem, identity, and body image in adolescent girls. [online] Scholarworks.smith.edu. Available at: https://scholarworks.smith.edu/cgi/viewcontent.cgi?article=2316&context=theses